As the Fifth Annual Show Me Justice Film Festival approaches, we continue our guest blogger series with a post by Juliana Brown, the director of the documentary Out of the Shadows. Brown’s film tells the story of Fernanda Marroquin, a 22-year-old undocumented immigrant living in Philadelphia who is ‘undocumented, unafraid, and unapologetic.’ Fernanda is one of a growing group of youth who call themselves the DreamActivists – brought to the United States as children, they played no role in their own illegal immigration, yet find themselves reaching adulthood unable to work, receive financial aid for college, or even get a driver’s license. The DreamActivists take to the streets, risking arrest and deportation to take a stand against the system that they feel has betrayed them. We join Fernanda as she comes out of the shadows and fights for her rights and a future in the country she has called home for over ten years.

Out of the Shadows and into the Immigration Debate

If you’ve watched a special news segment on immigration in the past few years, you might have momentarily thought that the United States was being invaded by green creatures from outer space. In fact, when those newscasters say  “illegal aliens” they are referring not to extraterrestrials, but rather to human beings. 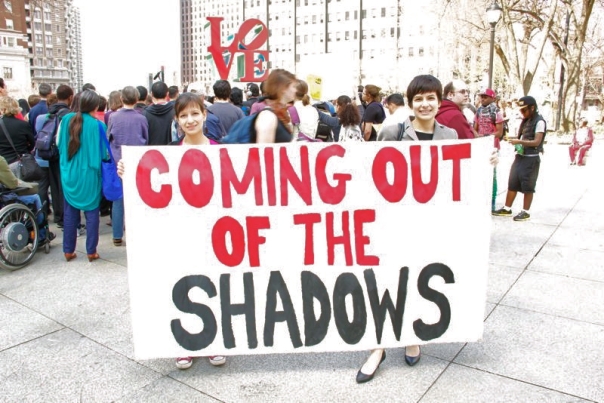 In our documentary, Out of the Shadows, about an undocumented student activist in Philadelphia, the implication of calling another human being “illegal” comes up multiple times. A protestor at a rally holds a sign saying “no human being is illegal” and a student in the epilogue describes the effect of realizing he is undocumented as “feeling like you’re not really considered a full person anymore.” While it is technically correct to define the term illegal alien as “a foreigner who has entered or resides in a country unlawfully or without the country’s authorization” (www.dictionary.com), many advocates of immigration reform are starting to consciously drop the word illegal from their dialogue surrounding immigration.

The othering effect (creating a “they are not one of us” mentality) of the words “illegal alien” is powerful, transforming the tangible lives of immigrants into an abstract idea, an invasive pest to be swatted away, rather than a full person with an equal claim to life on Earth. This mindset has created heightened levels of xenophobia and discrimination, and established an oppressed group of people who are subject to living in a constant state of fear, despite their many contributions to American society. It is a lot easier to deport, shoot at, and deny fundamental human rights to an “illegal” than it is to a human being, with a family, human needs, and dreams for their future. The ACLU and other groups like to say that “immigrants’ rights are human rights” because it challenges us to see the humanity and dignity that all people possess, including immigrants. Does it take citizenship to become 100% human? Of course not.

One of the main goals of our documentary is to challenge this common view of immigrants as “others”—an effect created by years of negative media and political rhetoric, and instead lay the building blocks of empathy, humanity, and understanding for the lives of undocumented immigrants. And what better place to begin than with the DreamActivists featured in our film—immigrants who were brought to the United States as children with their families, completely devoid of responsibility for their immigration status, yet continuing to pay the consequences for a decision they did not make. 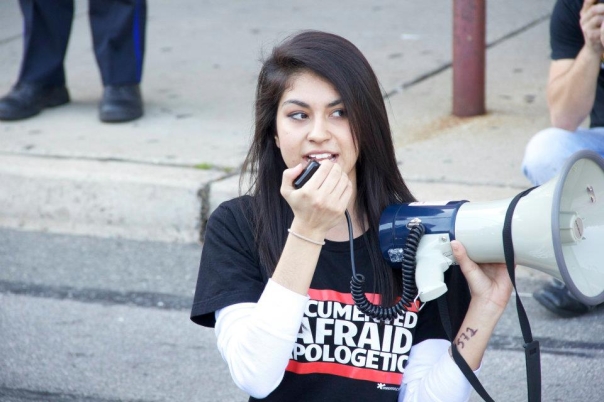 Another reason undocumented immigrants are often seen as nameless “others” in the American psyche is because many people have never met an openly undocumented person before. The nearly 12 million undocumented immigrants living in the United States today rarely reveal their immigration status for fear of retribution and deportation. In Out of the Shadows, viewers have the opportunity to witness the stories and daily struggles of undocumented youth, and find their own connections with the individuals featured in our film. By finding these similarities, they may realize that we aren’t all so different after all, and we can find yet another way to tear down the walls of “otherness.”

If our film could accomplish only two things, we hope they would be to shed light on the millions of people living in the shadows, and to spark a meaningful change within the dialogue of the immigration debate. Every immigration decision made in our courts has profound impacts on the daily realities of undocumented immigrants and their families.  Whenever immigration reform is discussed, we must always remember these impacts, and the fundamental similarities and humanity that we share with all people, including undocumented immigrants.

by Juliana Brown, director of Out of the Shadows, with contributions by Weddy Worjroh, producer, and Amy Diebolt, director of photography 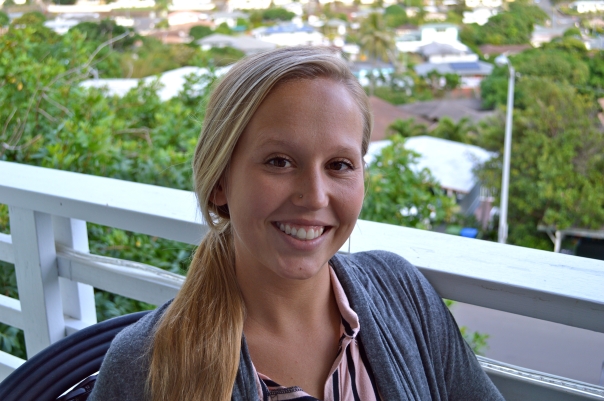