FAST AND CHEAP is a fake commercial in which giant androids on a construction site are exploited by humans.

I love commercials because they have to communicate an emotion which is psychologically linked to a very capitalistic message in a very short period of time. To achieve this, commercials use very direct tools like clichés, hyperboles, simplifications and a broad palette of manipulative aesthetics.

Because of this, I think commercials are a great genre for satire because everything is so over the top and so much cotton candy that some incoming bitter notes make a strong contrast.

I come from Germany where we had a lot of changes within the last 15 years regarding the social welfare system: There have been big financial and social cuts for people who lose their jobs combined with a lot of pressure. One the one hand, Germany has become a lot more successful economically because of these reforms, but on the other hand there is a growing gap between rich and poor, between people who make it and people who fall by the wayside. 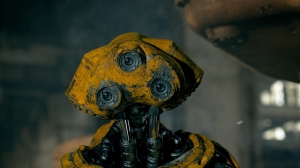 Though many aspects of these German job market reforms may have probably been necessary, its problems and negative effects were always sold to the public by the politicians like a used-car dealer would sell a piece of trash to a naive customer: While there is a lot rotting away in the dark, you just present a glittering surface.

That’s the reason why I made this film. We have old used-up robots doing hard and dangerous demolition work on a decaying construction site while the company CEO Mueller with the shiny smile is telling us about a bright reality. We can see that a lot of stuff is going wrong in the background while Mueller is showing us around but he just keeps on talking exchangeable phrases to sell his product.

This contrast was also the basic visual concept for the film: Mueller (played by the wonderful actor Stefan Nagel) should always be the shining centre of the commercial, that’s how we dressed, lit and cinematographed him – everything else in this world is rusty, instable and used-up. Mueller doesn’t care if his machines collapse or “die” because they are cheap and can be replaced easily, he doesn’t see individuals in them – it’s a bit like factory farming, isn’t it?

I hope you enjoy FAST AND CHEAP on the Show Me Justice Film Festival! 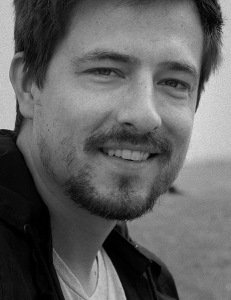